The Tarte Be a Mermaid & Make Waves Palette ($42 US) was a palette that I wasn’t interested in, initially. I had seen promo pics all over Instagram and made no mental notes to check this out because I was interested in other releases. When I went to my local Sephora on the day all of these crazy palettes released (it was insane!), I had a look at all of the new offers.

I swatched all of the palettes and 3 came home with me that day, this Tarte palette being one of them. As per Tarte:

“A mermaid-inspired eyeshadow palette with 14 matte and metallic shades, all stashed in a dreamy, iridescent seashell compact. Create looks fit for a sea siren with these glimmering neutrals, jewel tones, and aquatic hues in matte and metallic formulas. With Amazonian clay and mineral pigments, the creamy powder formulas blend beautifully, while balancing skin on lids to prevent pigment from creasing or fading.” 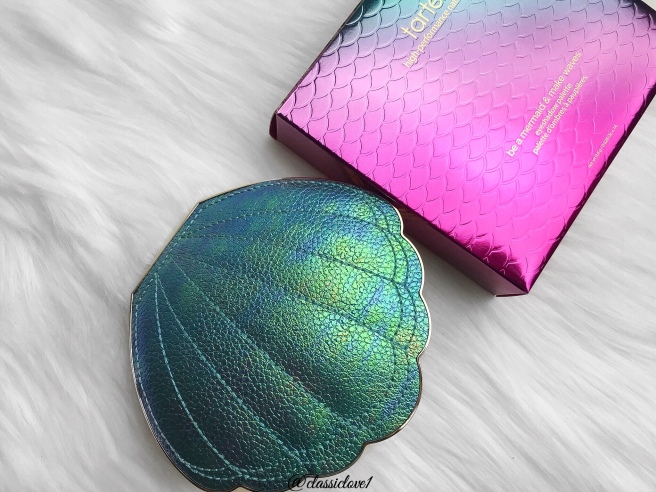 I do want to comment on the packaging first. It’s absolutely beautiful and I love that they created it to fit the theme: mermaid. The outer packaging is a gorgeous blue-green that is quite unique in my packaging collection. I do think the mirror is nice and can be used to create looks but I am not a fan of how bulky it is. I personally think it could have kept the seashell layout but been thinner. Its bulky and storing it/stashing it in my makeup bag does take up a lot of space – so if you’re someone who looks at that before buying, take note of that.

Now onto the palette itself. It has 3 matte shades and 11 metallic shades. I had read reviews that the matte shades weren’t very good – but I have had no problems at all applying them onto my eyes and blending them out. In fact, I have really enjoyed using them all, since there were very little of them to work with. They didn’t swatch very well but application wise – using a MAC 217 brush was a breeze.

The metallic shades were the selling point. I bought last year’s Make Believe in Yourself palette and had seen several people ask if they were the same formula. No they are not! The MBIY palette’s formula was very metallic but chunky. When using the palette it was easy to pick up enough product that some went flying everywhere and it was easier to just use your fingers. The Be a Mermaid’s metallic shade formula is also very metallic and pigmented, but it wasn’t chunky at all. I’ve used all the shades in this palette and have had no problems.

When I swatched them in Sephora well, I just really couldn’t leave without it. I contemplated getting either this or the Pat McGrath Bronze Ambition palette (isn’t that crazy?!) because I really liked both. However my mom, who usually is great at telling me I have enough eyeshadows, told me they were a little different so I caved and got them both. Anyway, they swatched so easily on the arm; very opaque with just one swipe. They blended well with the other colors chosen for eye looks and I didn’t find myself needing to use my fingers to get more opacity or using any sort of spray to make them more intense – although if you’re a fan of doing that you might get maximum pigment.

I also have to say that because there weren’t many matte shades to put in the crease (I wanted to use the palette on its own while I was testing it) I found that applying some of the metallic shades in the crease actually worked out pretty nicely. I created a mauve look, a golden look, and another using the blue tones and was very happy with the overall looks.

I think this palette is great – but it does have the “pop effect” I’ve seen going around youtube. If you cover the 3 colored shades then it might look like something you already have in your makeup collection. However, if you’re interested in this palette and wanting to know whether or not its good – then yes, it is a great palette!

One of the only downfalls with this is the lack of matte shades. I was able to create looks using metallic shades in the crease and outer corners, but if you’re not a fan of that, you will have to pull other matte shades to create a look. I would have liked for them to add 2-3 matte shades: a neutral shade to transition and a darker brown matte shade to smoke out the look you’re doing.

I think Sandbar is okay as a transition shade, but it definitely has the ability to pull cool toned- and since this palette has a nice mix of both cool/warm tones that can affect the look you’re trying to achieve.

Another concern for some might be the pan size. They may be too small if you use larger eye brushes – but i was able to use my MAC 217 and Morphe M443 brushes without issue.

Will you be picking up this palette? What are your thoughts on it? Let me know!

One thought on “Review: Tarte Be a Mermaid and Make Waves Eyeshadow Palette”